Responding to the reported wave of arson against black churches in the South, President Clinton proclaimed in a radio address that "racial hostility is the driving force." The president exhorted: "I want to ask every citizen in America to say . . . we are not slipping back to those dark days."

OK, Mr. President, I’ll say it. I’ll say it because this supposed "epidemic of hatred" is a myth, probably a deliberate hoax. There is no good evidence of any increase in black church burnings. There is, however, compelling evidence that a single activist group has taken the media and the nation on a wild ride.

USA Today claims to have compiled "the most comprehensive statistics available on church arsons in the South in the 1990s." According to the newspaper, "The numbers confirm that a sharp rise in black church arsons started in 1994 and continues."

But USA Today’s own chart belies this claim. It shows that two of the states didn’t start reporting data until 1993 and a third one didn’t until 1995. Naturally, when they did, the numbers went up. Among states that have compiled data going back to 1990, the number of black church arsons shown in the USA Today chart for that year (13) was two more than in 1994. The number in 1991 (16) was the same as in 1995. As for the 1996 numbers, law enforcement officials consider them unrepresentative because media publicity has generated copycat crimes.

What about federal data? The FBI doesn’t keep such statistics, and Department of Justice data are too scattered and sketchy to be useful. The Bureau of Alcohol, Tobacco and Firearms doesn’t give out data anymore because "people started using the numbers in contexts that weren’t justified," spokesman Jim Limbach told me. Only recently has the agency been ordered to investigate all church fires. Its earlier records mainly cover federal cases, while most arsons are under state jurisdiction. This and other problems — including a recent surge in calls from people reporting fires that happened some time ago — make the bureau’s current numbers worthless in measuring trends, Mr. Limbach said.

But he did refer me to a private group, the National Fire Protection Association. While its data don’t break down churches by race, they do show a dramatic drop in the number of church arsons — from 1,420 in 1980 to 520 in 1994. While arson committed against a house of worship is a heinous crime, it should be reassuring to know there have been far fewer recently than in years past.

So where did the story of black church burnings come from? It turns out the main source is the Center for Democratic Renewal, a group whose mission, says its promotional literature, is to work "with progressive activists and organizations to build a movement to counter right-wing rhetoric and public policy initiatives." Originally called the National Anti-Klan Network, it changed its name when the Klan largely fell apart in the 1980s. But instead of seeing that as a sign of declining bigotry, the CDR has continued for more than a decade to issue statements and reports "discovering" a sudden resurgence in racist activity.

The CDR’s agenda goes well beyond rooting out genuine bigotry; the group tars mainstream conservatives with the same brush as racist criminals. "There’s only a slippery slope between conservative religious persons and those that are really doing the burning," the Rev. C.T. Vivian, the CDR’s chairman, has said. Liberals like Jesse Jackson and Mary Frances Berry, chairman of the U.S. Commission on Civil Rights, have picked up the theme.

In late March, the CDR held a press conference and released a preliminary report showing a tremendous surge in arsons against black churches beginning in 1990. "You’re talking about a well-organized white-supremacist movement," the Rev. Mac Charles Jones, a CDR board member, told the Christian Science Monitor. On CNN he referred to "domestic terrorism." From there the story snowballed. A database search turns up more than 2,200 articles on the subject to date — including three huge layouts in USA Today on consecutive days.

The CDR claims there have been 90 arsons against black churches in nine Southern states since 1990, and that the number has risen each year, reaching 35 in 1996 as of June 18. Each and every culprit "arrested and/or detained," it stresses, has been white.

But when I contacted law enforcement officials in several states on the CDR list, a very different picture emerged. The CDR, it turns out, regularly ignored fires set by blacks and those that occurred in the early part of the decade, and labeled fires as arsons that were not — all in an apparent effort to make black church torchings appear to be escalating.

Even the claim that black churches have been singled out for arson is questionable. In 1995, according to USA Today, there were 45 arsons against white churches and 27 against black ones in the surveyed states. Since whites outnumber blacks by four to one in these states, that seems on the surface to suggest a strong racist element. 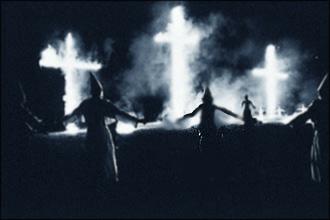 But as USA Today pointed out, "a higher percentage of black churches are in economically depressed areas, traditionally a factor in arson." Further, black churches tend to be smaller and therefore must be more numerous. Among the black churches USA Today surveyed, 67 percent had 100 or fewer members. Southern black churches often are in dark, lonely areas, are quite old and are made of wood. In other words, they’re an arsonist’s dream. Catholic churches, on the other hand, are virtually always made of brick or stone, and almost all are predominantly white.

So other than saying that some black churches over the years have fallen prey to racists, we can’t easily infer motives. "We have not uncovered in 38 cases a single piece of information to substantiate racially motivated fires," said Alabama’s Mr. Robison. Further, the arsons have "been happening for at least seven years," he said. "There have been no dramatic increases, except for this year because of the media hype." Other states’ officials have told him the same.

Here lies the ultimate irony. By claiming there has been an epidemic of black church burnings, it appears that the CDR and the media may have actually sparked one. They have also fomented tremendous racial division and caused great fear among Southern black churchgoers. What the Ku Klux Klan can no longer do, a group established to fight the Klan is doing instead.