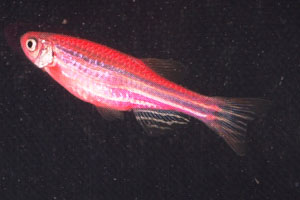 OK, this is a fish story. But it’s not about the big one that got away; it’s about the little ones arriving in stores next month called "GloFish." They’re ornamental pets, nothing more. Yet they shed light on both the tremendous promise of bio-engineered fish and the fanaticism of agricultural biotech opponents.

The GloFish is a tropical zebra fish about 1 1/2 inches long that’s normally bright red but becomes fluorescent Rudolph-nose red under ultraviolet light. Singapore researchers created them for their environmental benefits; to light up in the presence of polluted water. They’re like the canary in the coal mine, with fins instead of feathers. Various varieties glow different colors in response to different toxins.

You’d think environmentalists would embrace these – to the extent you can embrace a flopping, slippery little fish. But many insist the GloFish be gutted. That’s because instead of having been created through old-fashioned breeding they were made with the newer and more precise method of gene splicing. Specifically they’re given a gene from a sea anemone.

Never mind that conventional breeding would have been impossible since zebra fish and anemones couldn’t procreate if they wanted, which it so happens they don’t.

The sellers of GloFish, Yorktown Technologies in Austin, Texas, have now commercialized them for consumers.

But "Quel horreur!" say the anti-biotech activist groups, which include such usual suspects as the Sierra Club, Greenpeace and the National Environmental Trust. All three signed on to a letter to the Food and Drug Administration urging a "moratorium" on the sale of the fish.

Authoring the letter was the Center for Food Safety in Washington, D.C., which seems strange since nobody outside of a fraternity house would consider eating a GloFish. But "safety" is a rubric. The only food the Center opposes is biotech. And to it, "moratorium" is a euphemism for "ban."

The Center’s Executive Director Andrew Kimbrell, who while wearing his various hats has even fought against biotech drug development, wrote that if the GloFish escaped they would become "biological pollution." But the term is meaningless.

Almost all the plants and animals we eat came from other countries or from cross-breeding. Thus all might be called "biological pollution." Yes, we do have many costly invasive species such as Norway rats and kudzu but none are biotech.

According to the U.S. Geological Survey, there have been several incidents of accidental or intentional zebra fish releases in the United States. But the fish don’t survive. We don’t have tropical waters. The brilliant GloFish itself, while pretty to us, would probably signal "lunchtime" to predators.

Transgenic carp can provide a growing world population with a massive source of high-protein food.

Kimbrell’s real beef with the fish is that they "will set a precedent for all other (genetically engineered) fish producers, and the floodgates will almost literally be opened."

The explanation is that Kimbrell isn’t concerned with pets at all, but rather the main goal of fish biotechnology, which is to create food. And anti-biotech activists fight tooth and nail against all genetically engineered foods, be they crops or fish. That’s why the groups petitioned the FDA, which as you might guess doesn’t normally regulate pets.

Their great white whale is the Canadian-American company Aqua Bounty Technologies, which hopes to soon get FDA approval to grow salmon that develop three times faster than normal and hence can save money for both farmers and consumers.

No matter that the bio-engineered salmon are sterilized so that even if they escaped their pens they couldn’t threaten wild Atlantic salmon populations, or that there’s nothing about making a fish grow faster that would give it a breeding advantage over conventional salmon.

But what’s most exciting about these fish is the technology itself, which is already being developed for transferal into fish that feed the whole world such as carp, tilapia, and catfish. We know that wild fish catches are declining even as the world population grows. Meanwhile fish farms can pose environmental problems. But what if you can grow two or three times as many fish in the same time period?

"Carp is a Third World fish," explains Joseph McGonigle, vice president of Aqua Bounty Technologies. "But it’s only grown at subsistence levels. With a carp that grows twice as fast, suddenly you have a situation where one fish crop can feed the family and the other goes to market." Both fish producer and consumer benefit. Tilapia and catfish are also popular in the Third World as well as here.

Some day soon transgenic fish may help feed literally billions of underfed people in the poorer countries – so long as overfed activists from the richer ones do not prevail.