Hallelujah, the disaster has been averted! The World Health Organization last week declared the H1N1 swine flu pandemic over .

Except for one little thing: It never happened. That is, the WHO had no business labeling it a "pandemic." It did so purely for its own interests, wreaking worldwide havoc. 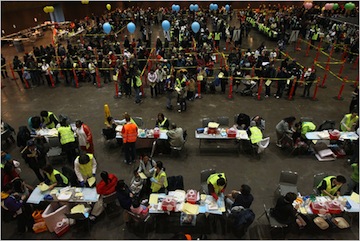 In a scene repeated all over the country, thousands wait in line in San Francisco to get the swine flu vaccine.

In April 2009, WHO flu czar Keiji Fukuda declared that we could be facing a contagion on the order of the Spanish flu of 1918-19, and the United Nations soon concurred . Spanish flu killed about 50 million worldwide and 675,000 in the United States.

Yet, with the "pandemic" over, here’s the final toll: "Over 18,449 " people have died worldwide, says the WHO. By comparison, garden-variety seasonal flu normally kills 250,000 to 500,000 annually. The mildest pandemic of the 20th century killed a million people worldwide.

The U.S. had about 12,500 flu deaths, according to the Centers for Disease Control and Prevention (CDC), a third the usual number. Yet reported swine flu deaths in Canada were only about a tenth the usual rate, while the U.K. had an even lower ratio. That indicates the CDC figure is vastly too high.

So how does the WHO explain the fact that you’re still alive to read this? We were "just plain lucky," shrugs Director-General Margaret Chan. That’s really the best she could do - or felt she needed to do.

In fact, there was never a need for luck or alarm. Just two days after Fukuda’s Spanish flu comparison, I wrote of a "porcine panic." I went on to reiterate in many more articles that flu fears were being overblown: When the WHO made the pandemic official , for example, I noted that swine flu had killed only 144 people worldwide in 11 weeks, fewer than die each day from ordinary flu. If I knew the outbreak was being exaggerated, then the WHO and others knew or should have known. 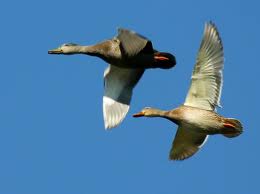 When the "when, not if" avian flu pandemic that was to kill hundreds of millions flew away, the WHO seized upon swine flu to say its pandemic warnings were justified. To do so, it had to change the definition.

The previous definition of influenza pandemic required "several, simultaneous epidemics worldwide with enormous numbers of deaths and illness." But the agency wanted an H1N1 pandemic - badly. It had lost credibility for sounding the alarm for five years about H5N1 avian flu , described as a "when, not if" pandemic that could kill hundreds of millions .

So when swine flu trotted in, the WHO rewrote its definition to say pandemics "can be either mild or severe." That renders the term meaningless, because seasonal flu always causes "simultaneous epidemics worldwide."

This gave license to others to treat swine flu as a pandemic in the commonly accepted sense of the term. Thus, last August, the President’s Council of Advisors on Science and Technology forecast a "plausible" scenario of 30,000 to 90,000 U.S. deaths. In the Washington Post, author John Barry predicted more than 89,000 American deaths .

This was obviously nonsense . We already had information from all over the world showing swine flu to be vastly milder than the seasonal variety. A New York City estimate suggested that seasonal flu was 10 to 40 times deadlier than swine flu. In Australia, with the epidemic already well under way and no vaccine generally available, people were dying at a lower rate than normal.

In October, U.S. health officials launched a campaign to panic parents into getting their children inoculated, prompting such headlines as "CDC shocker: swine flu killing young people at record rate." This was inexcusably cruel : Not only were officials exaggerating a tiny risk; they were doing so when a vaccine wasn’t widely available.

Today, with incredible chutzpah, the WHO even denies that it rewrote the definition of pandemic. "Having severe deaths has never been part of the WHO definition," Fukuda said . So what if references to the changed definition are all over the Web, including in the WHO archive ? It’s like Paris Hilton denying the existence of her sex tape.

Meanwhile, the world has wasted billions of dollars that could have been spent on diseases like tuberculosis, which each year kills 70 times as many people as swine flu did, according to the WHO. Now add in the "crying wolf" factor, which means many people will ignore public-health warnings when a truly nasty disease comes along, and you’ll see how much damage was done by the swine flu disinformation campaign.